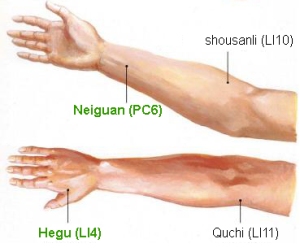 Acupuncture is effective for pain relief after surgery of the cervical spine. Researchers find electroacupuncture applied to acupoints Hegu (LI4) and Neiguan (PC6) safe and effective for achieving significant pain relief. Surgery on the anterior cervical spine is a complex procedure. Analgesics including fentanyl and sufentanil may be used to alleviate postoperative pain. However, due to concerns regarding respiratory depression, they are often prescribed at low dosages leading to only a partial painkilling effect. The results of the perioperative research finds acupuncture effective for pain relief and for stabilizing hemodynamics during surgery.

Acupuncture point Hegu is traditionally used by licensed acupuncturists to relieve pain and dredge the acupuncture meridians. Neiguan is used by licensed acupuncturists to calm the shen (spirit), which has a tranquillising effect. Neiguan is also used to regulate the heartbeat, alleviate nausea, and to reduce pain. Together, these acupoints may be used to relieve pain in patients undergoing cervical spine surgery. Using electroacupuncture at the acupoint sites has the advantage of providing continuous acupoint stimulation, effectively relieving pain and reducing the required dosage of opioid analgesics. Moreover, it is a straightforward procedure to administer with minimal risk of adverse effects.